An extremely handy addition to nuke for a shareware like price tag. I don’t usually do reviews but this little app deserves some exposure as its made my life a lot easier in recent weeks.

Edit 1: They have just released v2.3 which has added very very handy features for speeding up workflow. I’ll update this review when I get time or possibly write a new article on these new features but it is well worth the free upgrade.

Edit 2: A year later, into another season of the show and this little app still is saving me a ton of time, …now is at v3, …and I really must do a new article on using it.

Here’s a video for the new features:

After a number of years working for big FX facilities, I decided to get back to my roots and do some television fx work remotely. Coming from facilities that use shotgun (or similar) and getting used to having that organizational tool to help see an overview of where you are at and for jumping around shots was really handy. On the flip side, for me just working at home on a dozen or so shots per episode, having something like that was overkill, …but I did need something.
I started with spreadsheets, but it wasn’t exactly a nice integrated solution. After a bit of google surfing I came across this crazy cheap little solution from Cragl called Smartlib. It is a Nuke add on that brings a basic shot management interface into Nuke.

With it I can get it to set up shot directories from an existing folder structure or a template (even modify a template nuke script that will then be created for every shot), see all my shots from an episode with thumbnails, mark status with a colour, add notes, and load up a script (any version) with a simple click from the interface. It can even export a PDF table layout of all your shots with their current status and notes if you wish to print them out or send them to a supervisor so they can see how you’re going. It will also set up default render location/file type/padding for your renders for each shot so any write nodes you create conform to these settings. 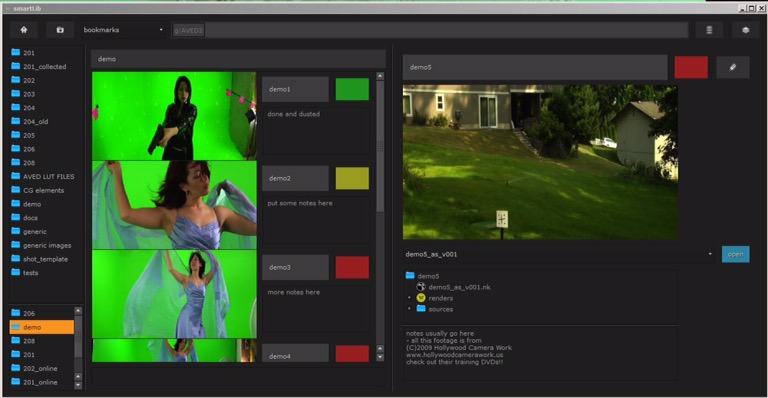 Once installed you can call up the interface by simply hitting the comma key (,) while over the DAG (node tree). This pops up a floating panel interface with 4 main windows, a basic directory listing of folders in the selected directory (top left pane), bookmarked projects/folders below that (in my case, episode folders I have selected from the above directory. Lower left pane), a window listing all the shots in that project/episode in sumary with notes and status (you can also create new shots in this window via a right-click menu, be it from a template or not. Centre pane), and a window with details on the currently selected shot from where you can launch the most recent version or select an older version script from a pulldown menu (right pane).
There is also a cragl menu item in the main menu bar of nuke where you can set preferences (such as setting thumbnails for clips, setting custom status labels/colours, and creating templates for your directory structures (I have two, one for postviz and one for finals, which are the same directory layout just with different starting template nuke scripts).
An undocumented feature is that once you create a template, it is saved in a special cragl directory. If you go and open this blank nuke script, you can add whatever nuke nodes you like to build a base for any new shot that is created. Very handy. On a PC this folder is in your user folder.

E.G.
C:\Users\PC\cragl\smartLib\shot_templates
I found this out when I talked to support. Being a small team who make this software, its refreshing to talk to the guys who actually are hands on developing the tools and actively want to take on board suggestions to improve it. There was a tiny quirk initially with my windows version of the app but within a couple of days of me bringing it up not only had they sorted those out for me but had included a couple of feature requests I’d made. I was blown away at how quickly they moved and got a new version out for me to test. I can see this app growing quickly as more users give feedback as to features they would like.
I have only been using it a few weeks but already it is indispensible. Just being able to use a clean thumbnail based “to do list” style interface to jump from shot to shot, version to version, quickly across multiple episodes when I need to, and create new shot directory structures at the click of a button is saving me tons of time. Sure if you have Nuke Studio with shotgun you can do all this and much much more, but not all of us can justify the cost of Nuke Studio for our general comping work, or setting up shotgun purely for our own use, so this little app fills a niche for those of us doing freelance remote work, letting us keep track of things via a clear interface (…and the bonus is it is cheap as chips!!). I highly recommend it!

Click here to go to their product info page and look below at the intro videos about it.