This is an intriguing release that I’m keen to have more of a look at. Basically The Foundry have squished Hiero and Nuke together into one app, with some GPU accelerated versions of some of the usual Nuke nodes that you can apply within the timeline of the editing side of the application, and a render farm back-end that allows you to render comps in the background (will also hook into any current render farm you might have). So you get editorial, FX and finishing all in the one app. 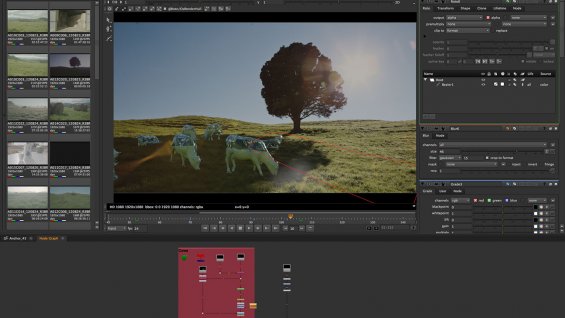 I get the distinct feeling Foundry are looking to open up new markets (advertising), starting to see if they can eat into the Flame/Smoke market. If they can get the realtime effects working solidly along with good editing stable editing tools, they might just start to do that. I have done a lot of episodic TV and for me this is an extremely interesting mash up as we always had headaches going from avids and postviz to the smoke onlining suites, …this looks like being a great way of simplifying things, …as vfx artists work on their shots, the timeline in nuke studio can update with latest versions, …likewise if a supervisor is running a copy, they can look at all the clips in the context of the cut, if they have a client in they can show them a scene with all the current versions in, and if the client wants to go back a version or two, it is a very simple tap away to version up or down any clip (and straight away see it play in the cut), it also means the super can load up nuke scripts and make changes as well (if they want to work with the client there).

It also operates in a quick timeline way so if you were on set or with a client, you can quickly throw shots together in the timeline (we used to use After Effects a lot because of just this ability, it was quicker on the run), and then later output what you have bashed together as a nuke script (which forms the base for the proper comp).

Rumor has it that current nuke and hiero users will get to beta test it in the coming months with it being released towards the end of the year.

Here is the release video.

FXGuide have a lot more information, so you should click on the logo below to head there to check out their article.

..and below is the press release:

VFX, editorial and finishing in one application

NUKE STUDIO will give users the ability to do VFX, editorial and finishing in one single application and will be available later this year.

This brand new tool extends the existing NUKE product line and draws on The Foundry’s existing powerful compositing, conforming and shot management technology, as well as adding a host of new features and functionality.

The resulting combination is a powerful node-based VFX, editorial and finishing studio that’s been designed to empower creative individuals working independently as well as collaborative teams working on quick-turnaround projects in a way that’s previously never been possible.

“We’ve spent a long time working with a wide range of artists from around the world to properly understand the challenges and requirements of todays industry,” comments NUKE Product Marketing Manager, Philippa Carroll. “We wanted to make a product that can offer artists a new way of working, that meets the needs of fast turnaround production. NUKE STUDIO lets you do more with NUKE than ever before. We know that artists are under greater and greater pressure to turn around projects faster and that calls for a solution that gives them more power, control, and flexibility than ever before.”

What’s really unique about NUKE STUDIO is that an individual can work on a project from end to end, with complete creative control within one application. It also has a collaborative framework that allows that individual to work seamlessly with a team.

NUKE Product Manager, Jon Wadelton comments: “With NUKE STUDIO we’ve created a solution that enables supervisors and leads the power to run a project with complete individual control but without any restrictions on the collaborative workflow that is so important today.”

Chris Smith, Commercials Director comments: “The brilliance of NUKE STUDIO is that you can think of a project from beginning to end as one step. You can back up and go forward as you want to. It allows you to work with clients immediately on the whole process and get as detailed as you want. There’s no need to go out to another system. Visual effects, editing, it’s all there.”

Fluid end-to-end workflow – Combined timeline and node-graph workflow lets artists work the way they want with all the power to create a project in one app from start to finish.

Powerful collaborative control  – A hub for total project control lets artists share scripts, work collaboratively with annotations and version up and down with ease.

Intelligent built-in rendering – Built-in render farm functionality automatically uses all available resources to enhance speed and performance, either on a single machine or when connected to multiple.

Complete power of NUKEX – Jump right into the node-based NUKE environment to build complex comps and shots with ease.

Pipeline friendly out-of-the-box – Designed to integrate with off the shelf or internal asset management systems and pipelines.